Sims for other organisations:

Regulations for all events

What are we raising money for ?

The 2020 event was held just before the Covid-19 "lockdown" -and the final figure was £5,595.88 so the total raised for RNLI over the three years was a splendid £17.328.76 - one each for our three wonderful LIfeboat stations here in Orkney! The funds go to RNLI generally of course, but they are aware that it was raised through our three stations if you see what I mean.

So a huge huge thank you to everyone who took part and raised this money ... it is so appreciated.

The 2019 event raised £6,073.43 which was presented to the Stromness Lifeboat Station - again the funds go to RNLI HQ but Stromness are in the middle of reorganising their office space and were going to make a special request that some of the funds be used for that.

The 2018 event raised £5,659.45 for RNLI in memory of Mark's brother and we went along to the Kirkwall Lifeboat station where we were so pleased that the crew turned out to say thank you and to have their picture taken with us. The funds go to RNLI central office of course, but it was lovely to be able to make the presentation. You can download the official Press Release sent out by the RNLI by clicking here - and here is a pretty picture of the presentation. The crew were just back from bringing a stranded sailing boat safely home and were heading off on exercise a bit later. A wonderful group of very brave men and we were very proud to have been able to help them. Thank you all for your support - and please join us again next year! 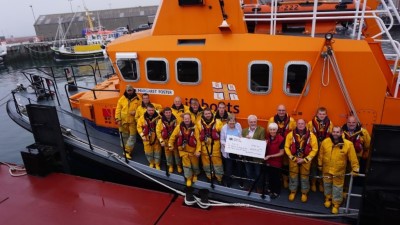 We raised the funds mainly in memory of Mark's brother, Geof, who died unexpectedly and was a great supporter of RNLI and at his funeral a collection was made specially for them. During his life he loved his weekends away and firmly believed in Kenneth Graham's view that "there is nothing - absolutely nothing - half so much worth doing as simply messing about in boats.” We could guarantee that the Christmas card we received from him each year would be one of the RNLI Charity Cards.

Did you know that RNLI relies totally on donations ? our own lifeboatmen tell us that it is surprisingly easy to raise the several million needed for a new lifeboat, as often someone will just give the complete boat in memory of a family member or something like that. It's raising the funds for the day-to-day running of the Institute and it's volunteer crews that is far more difficult. Although we presented the cheque to "our" lifeboat crew here in Kirkwall, it goes into central funds, to buy things like new yellow wellies - I am told they cost £13 per pair so it seems we managed to raise enough to buy about 435 pairs!

The other reason is ... that now we ourselves live on a small island off the top of Scotland we are even more aware of the importance of this wonderful group of people who put their lives at risk so often to go to the rescue of stranded ships. We are always informed when one of our three lifeboats (Kirkwall, Stromness and Longhope) goes off on a "shout" and we are always relieved to get the message that they are home safe and that a successful mission has been accomplished. Of course there are times when tragedy has occurred and the island comes together as a community to support those concerned which means a lot.

So please please support us if you can.